King’s Somborne was included in the Domesday survey in 1086 when it was owned by the King in lordship and known as ‘Sunburne’.

The population included 25 villagers, 8 smallholders, 2 slaves and 7 freedmen. Three mills and two churches are also noted in the survey together with land for 10 ploughs and areas of meadow land and pasture. The present church of St Peter and St Paul, part of which dates to the early 13th century, probably occupies the site of one of the original churches. 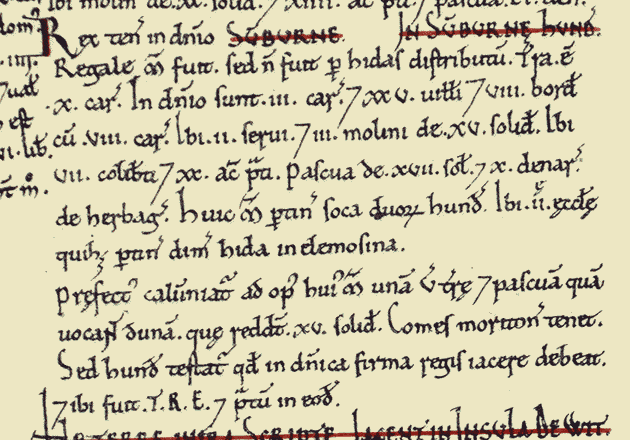 Mention of Sunburne in the Domesday Survey 1086

The ‘Sombornes’ comprise the scattered village of King’s Somborne, together with the hamlets of Little Somborne, Up Somborne, and Ashley.

Between King’s Somborne and the river lies John of Gaunt’s Deer Park and to the south the Romans had a river crossing.

King’s Somborne had its own drove road used by travellers unwilling to pay the tolls on the turnpike roads to Stockbridge and the Fair. Cruck beams still survive from the 15th century flint and chalk cottages in the village. These beams were whole timbers curving from the roof to the ground. Nearby Marsh Court is built entirely of blocks of local chalk and designed by Edwin Lutyens, as was the war memorial which stands in the village. The original garden plan for Marsh Court was designed by Gertrude Jekyll. Somborne Park is the home of the Hervey-Bathurst family and Compton Manor was the home of the late Sir Thomas Sopwith of aviation fame. The cliffs at Brookare a local landmark where chalk is extracted.

At Ashley, near Farley Mount, the Normans built a large castle. At Eldon is the tiny 12th-century Church of St John the Baptist, (now redundant). The ecclesiastical Parish of Somborne with Ashley has three restored or conserved redundant churches within its boundaries.
Little Somborne has the small but charming church of Saxon origin, redundant but conserved in the 1970s and now used for two services a year.
Up Somborne, a ribbon of houses among farmland, is under one mile from Little Somborne.

Archive of Agendas and Minutes